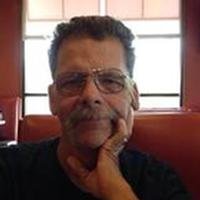 Andruchuk, Walter, Jr., died Tuesday, June 7, 2016 at Roger Williams Medical Center. He was the husband of Antoinette (Sepe) Andruchuk. Born in Providence, he was the son of the late Walter Sr. and Dorothy (Emond) Andruchuk. Besides his wife he is survived by his sons Damian and Ronald Andruchuk and George Thibault, his daughters Kat Evans Hernandez, Nicole Santagata, and Alicia Pieranunzi, his brother Richard and his wife Marie Andruchuk, his sister Barbara Imondi and 10 grandchildren. Walter was a disabled Army Vietnam veteran and served as Vice President of NAM Knights of America MC Boston Chapter. His funeral will be held Friday, June 10, 2016 from the Hoey-Arpin-Williams-King Funeral Home, 168 Academy Ave., Providence with visitation from 8:30am to 10am followed by a service at the funeral home at 10. Burial with full Military Honors will be in Gate of Heaven Cemetery, East Providence. ARRANGEMENTS BY SUPINSKI & BORRELLI Please click here to view the video tribute.