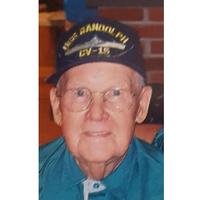 Bouchard, Arthur, O., 93, of Callan St. died Wednesday, June 8, 2016. He was the husband of the late Stasia R. (Hertel) Bouchard. Born in North Providence, he was the son of the late Omer and Marjerie Bouchard. Arthur was the father of Bob Bouchard and his wife Joyce, Carol Ferry and her husband Norman, Janet Brearley and her husband Tom, and Kathy Kauffman and her husband Glenn and the late Arthur Bouchard Jr. He was also survived by his grandchildren Patrick and Ryan Brearley, Brittany Littlefield and her husband Kevin, Cory, Connor, Christopher and Autumn Bouchard, and Nichole Kauffman, and 4 great grandchildren. He was the brother of Paul Bouchard and his wife Joan, Pauline and her late husband Richard Zambarano Sr., and the late Jeannette Bouchard. He was a Navy World War II veteran aboard the USS Randolph. His funeral will be held Monday, June 13, 2016 from the Hoey-Arpin-Williams-King Funeral Home, 168 Academy Avenue, Providence with visitation from 8:30am to 10am followed by a Mass of Christian burial in St. Adalbert’s Church, Atwells Ave. at 10:30am. Relatives and friends are invited. Burial with full Military Honors will be in St. Ann’s Cemetery, Cranston. In lieu of flowers donations in his memory can be made to St. Adalbert Church, 866 Atwells Ave., Providence, RI, 02909. ARRANGEMENTS BY SUPINSKI & BORRELLI