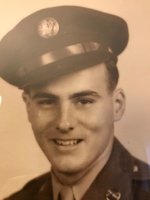 Adams, Ned, A., 93 of Portsmouth, Rhode Island, and formerly of Connecticut. He was the husband of the late Anne (Seeley Pickett), Adams. He was born in Hartford, Connecticut, on May 9, 1926, the son of the late Robert and Olive (Stinson) Adams. Ned passed March 6, with his loving family at his side. Ned was a graduate of Bard College, worked for the Hartford Insurance Co. for 30 years and was a member of St. Paul's Episcopal Church. He loved golf, bowling, walking his dog, and was an avid Giants and Celtics fan. He was a machine gunner in the Army during WWII in the First Cavalry Division in the Philippines and Japan. He relished his meeting with a Komodo Dragon as well as Red Skelton. He was very proud of his service as a "Trooper" against a vicious foe. The First Cavalry was a famous Unit in WWII and continues to be well respected to this day. He was a devoted Episcopalian and treasured the friends he grew to know. His eldest daughter Julia preceded him in death. He is survived by two sons Henry C. Adams, William R. Adams (Ann Lee), one daughter Victoria P. Kirby, eight grandchildren Peter Adams, Trevor Barrows, Jocelyn Werkheiser, Mariah Barrows, Alexander Kirby, Torianna Kirby, Alexa Lee Adams, and Micheal Adams. A graveside service will be in Washington, Connecticut with Military Honors at a time and place to be announced on the Mount Pleasant Funeral & Cremation Service Site If desired, contributions in his memory may be made to Steep Rock Association, Washington, Connecticut.