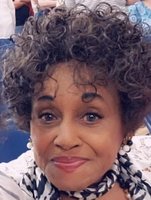 Mrs. Pearl Johnson, 90, of Portsmouth, Rhode Island, passed away just after 6:00 am in Middletown. She was born November 7th, 1930, in Lumpkin, Georgia, by way of Pittsburgh, Pennsylvania. Pearl was the daughter of the late Flisher Anderson and Willie Stenson. She has a sister, Rosa Lee Gilmore, and her son, Duane of Pittsburgh, PA. She was the wife of the late Clarence James Johnson of Pittsburg, Pennsylvania, on February 27th, 1947. She was a dedicated navy wife to a Chief Quarter Master. She was a nurse for over 20 years at Newport Hospital, where she nurtured her patients with love, compassion, and laughter. She applied that and more as she started her own family. Clarence and Pearl were blessed to welcome their firstborn, the late Justine Antoinette Johnson, on March 13th, 1949. Justine and her Husband Jimmy had two sons, Timothy James Tillman and Julian Lamont Tillman. Timothy’s wife Sheryl Tillman gave birth to Tim Jr., Dina Tillman, Lyric, Maleeya, and Cassidy. Tim’s daughter Justine had a daughter Jasmine. Timothy’s other son Nico had a son Israel and a daughter Hope. Julian’s wife, Shonda Latisha Tillman, had a daughter Evelyn Anniah and a son Julian Amari. Pearl had another child on November 19th, 1957. Jay Darrell had a daughter Jadyne Antoinette Snead Johnson, and her daughter Payshense Savannah Pinderhughes. Then Tatiana and her daughter Kiara. Lil Jay Arsenault is his last birthed. Her last child was born on September 20th, 1961, was her son Johnny Aaron Johnson. His firstborn was Aaron Hilton. Then Johnnie Aaron Johnson II, followed by Jelani Ashante’ Johnson. Pearl’s wealth of character and laughter she has brought to both her family, friends, coworkers, parishioners, and strangers was also defined in her position being the matriarch of a family where she is a Great, Great Grandmother. For further information and condolences, please visit mountpleasantfh.com.