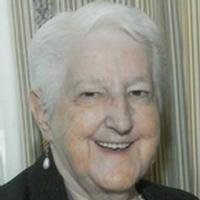 Fernande Bellisle, 86, of Providence, passed away Monday, February 16, 2015. She was the wife of the late Frederick Bellisle. Born in North Attleboro, MA, she was the daughter of the late Albert and Palmira (Ledoux) Monast. She was a bench worker for North Safety of Cranston for 23 years, retiring in 1991. She is survived by her children, Dianne Donaghy, Leo, Roger, and Dennis Bellisle; three sisters, Theresa Caron, Pauline Proulx, and Paulette Perreault, seven grandchildren, and six great grandchildren. She was the sister of the late Leo Monast. The funeral will be held Friday at 9am from the Hoey-Arpin-Williams-King Funeral Home, 168 Academy Avenue, Providence, followed by a Mass of Christian Burial at 10am in Our Lady of Lourdes Church, 901 Atwells Avenue, Providence. Burial will be in Saint Ann Cemetery, Cranston. Relatives and friends are invited. Visiting hours Thursday from 4-7pm in the funeral home.