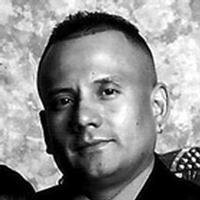 Jose Francisco Navarrete passed away on February 22nd, 2015 at his home in Exeter, Rhode Island at the age of 49. He was born in Ecuador to Mrs. Agueda Lucas, but called New York City his stomping ground for the better part of his adolescence. During this time, he would move to Rhode Island to make a home for his family and become the proud father of Jazmin, Joseph and Jillian. He was employed at Rhode Island Hospital for 11 years and developed a breadth of friendships which he considered his second family. A cooking aficionado and an avid Yankee fan, his friends and family all remember his amazing dishes and how proud he was to have learned all his culinary skills from his mother. Jose never turned down an opportunity to fish, travel and enjoyed laughing with his friends. His bright eyes and smile warmed the hearts of all he knew. He is survived by his children: Jazmin, Joseph and Jillian, his former spouse, Lucy Navarrete, his mother, Agueda Lucas, his sisters, Marjorie Oviedo and Lourdes Flores and his companion, Suzanne Lowe. Relatives and friends are invited to visiting hours on Friday, February 27, 2015 from 4-8pm in the Hoey-Arpin-Williams-King Funeral Home, 168 Academy Avenue, Providence. His funeral will be held Saturday at 9:30am in the Hoey-Arpin-Williams-King Funeral Home followed by a Mass of Christian Burial at 11am in Blessed Sacrament Church, 179 Academy Avenue, Providence. Burial will be private. In lieu of flowers, donations may be made to the Providence Center (Mental Health & Substance Abuse), 528 North Main Street, Providence, RI 02904