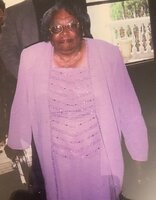 NELLIE ELIZABETH ALLEN It is with deep sorrow and much love that we acknowledge and mourn the passing of Nellie Elizabeth Allen on the 11 th day of December, 2021. Nellie E. Allen was born July 25, 1923 in the quaint Village of Apponaug, Rhode Island, where she was raised and graduated from Lockwood High School. Nellie was the daughter of Russell and Cora “Boyd” Watkins and she had seven siblings; four brothers Howard Watkins, Ernest Watkins, Russell Watkins and James Watkins; and three sisters: Abigail Briggs, Edith Watkins, and Ellen Gardner, all of whom pre-deceased their sister Nellie. She was the wife of the late Leonard A. Allen and together they had 11 children, three of whom are deceased, Shirley L. Peterson, Rita F. Allen and Leonard A. Allen, Jr.. The remaining children include Barbara Osborne of Los Angeles California, Roland E. Allen of Ellicot City, Maryland, Ronald W. Allen of Warwick, RI, Dianne E. Dorvilier, Richard J., Robert L., Deborah L. and Lisa J. Allen, all of whom reside in the City of Providence. This Matriarch’s 98 year journey, “down this road called life” was not absent of life’s challenges. Her unwavering faith coupled with God’s Blessings “Got Her Through”. One of her favorite quotes was “God won’t put more on you than you can bear”. She was the doting grandmother of 22 Grandchildren, 55 Great Grandchildren and 24 Great Great Grandchildren. She had the ability to make each grandchild feel so loved and special that they all claimed to being “Nana’s favorite”. In addition, she is survived by a host of beloved nieces, nephews, extended family members and friends. Her second most used statement which she attributed to her mother was “Don’t say you don’t know, because you do know.” We believe it is fitting to employ this often-used statement to explain to those present who may question why God decided to reunite Nellie E. Allen with her love ones in Heaven. “Don’t say you don’t know, because you do know.” Our mother, your Nana and the Matriarch of the Allen Clan “lived a long and Blessed life”, however the deterioration of her body was overwhelming, and her suffering needed to end. She is in Heaven enjoying the rewards of 98 years of living a life filled with love, caring and unselfish acts of giving, and most importantly, an unwavering faith in God’s salvation. Today is a day to celebrate Nellie Elizabeth Allen’s homegoing service and pray that our life’s actions prepare us to see her again in the afterlife. Due to COVID concerns, the funeral services for Nellie Elizabeth Allen will be private. Rest In Peace My Mother, My Grandmother, My Friend