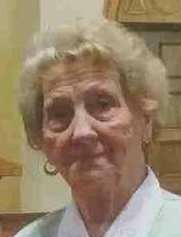 Please share a memory of Kazimiera to include in a keepsake book for family and friends.
View Tribute Book
Kazimiera, (Trojnacka) Kozlowski 84, passed away Wednesday, December 8, 2021 peacefully at home. She was the widow of Kazimierz Kozlowski. Born in Poland she was the daughter of the late Jan and Bronislawa (Karyta) Trojnacki. Mrs. Kozlowski enjoyed spending time with family and friends. She is survived by her three sons, Robert Kozlowski, Adam Kozlowski and his wife Tracy, and Jacek Kozlowski, her grandchildren, Christopher, Arnold, Jessica, Michael, Alexander, and Victoria Kozlowski, and her great granddaughter Athena. She was the sister of the late Stanislaw Trojnacki and Leslaw Trojnacki. Her funeral will be held Tuesday, December 14,2021 at 9am from the Mount Pleasant Funeral Home, 168 Academy Ave., Providence with a Mass of Christian burial in St. Adalbert’s Church, 866 Atwells Ave., Providence at 10am. Relatives and friends are invited. Visitation will be held on Monday from 5pm to 7pm. Burial will take place in St. Ann’s Cemetery, Cranston. Arrangements by Supinski & Borrelli.
To plant a beautiful memorial tree in memory of Kazimiera Kozlowski, please visit our Tree Store

Look inside to read what others have shared
Family and friends are coming together online to create a special keepsake. Every memory left on the online obituary will be automatically included in this book.
View Tribute Book
Services for Kazimiera Kozlowski
There are no events scheduled. You can still show your support by planting a tree in memory of Kazimiera Kozlowski.
Plant a tree in memory of Kazimiera
Share Your Memory of
Kazimiera
Upload Your Memory View All Memories
Be the first to upload a memory!
Share A Memory
Plant a Tree