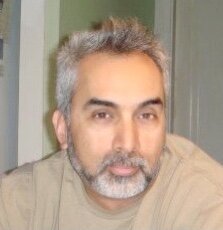 Please share a memory of David to include in a keepsake book for family and friends.
View Tribute Book
David A, Dionisio, 61, of Richmond, passed away unexpectedly on May 7, 2022. Born in Providence, he was the son of the late Jose Serrano Dionisio and Anna Bogosian. David was a proud United States Marine Veteran and a hunting enthusiast. He spent part of his career at the Rhode Island ACI and at Toray Plastics. Finally, he was hired at Senesco Marine in the early 2000s as a welder and eventually climbed up the ladder to become an Erection Supervisor. David trained many young men throughout the years and was looked up to by many of them. In his tenure, he was involved with the construction of fifteen tugboats, twenty-six oil barges, and many smaller projects. He would have been celebrating his twentieth year with his colleagues. David was the father of Patricia Estes and Phillip Gadrow; grandfather of Jayde, Aysia, Hunter, and Jakob Estes; brother of Patricia Dionisio, Joseph Young and Deborah Dahlen; and uncle of Nicole Gill, Kristen Clark, and Jennifer Washburn. David will always be remembered as an honest, loyal and hardworking man, someone you could always depend on. Some may think he was a quiet man of few words, but if you had the pleasure of really knowing him, you would know that he had loved telling stories and catching up with his family and friends. If you wanted to hear about hunting or fishing adventures, he could have easily talked for hours. He will be dearly missed by so many who all hope that he had known how special he was in their lives. David’s visitation will be held on Monday, May 16, 2022, at the Mount Pleasant Funeral Home, 168 Academy Avenue, Providence, from 6:00pm - 8:00pm. A private funeral service will be held at the convenience of the family. Burial with military honors will be in RI Veterans Cemetery, Exeter. For further information and condolences, please visit mountpleasantfh.com.
To plant a beautiful memorial tree in memory of David Dionisio, please visit our Tree Store

Look inside to read what others have shared
Family and friends are coming together online to create a special keepsake. Every memory left on the online obituary will be automatically included in this book.
View Tribute Book
Services for David Dionisio
There are no events scheduled. You can still show your support by planting a tree in memory of David Dionisio.
Plant a tree in memory of David
Share Your Memory of
David
Upload Your Memory View All Memories
Be the first to upload a memory!
Share A Memory
Plant a Tree