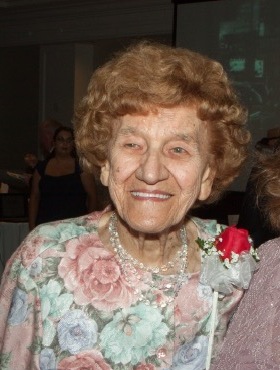 Please share a memory of Dr. Dorothy to include in a keepsake book for family and friends.
View Tribute Book

Dr. Dorothy Rose (Mierzwa) Pieniadz, 98, former dean of students and professor emerita at Rhode Island College, a lifelong philanthropist, and leader in education, passed away on Sunday, December 11, 2022. A daughter of the late Louis V and Rose C (Janik) Mierzwa. Dorothy Pieniadz was the wife of the late Edward W Pieniadz, and she is survived by her sister Esther Mierzwa and numerous nieces and nephews.

She said one of the things she learned at Teachers College was that public service is an integral part of being a teacher, and she carried these ideals with her into her teaching and administrative career.

In 1956 she was made Rhode Island College's first dean of students (and the first female dean). She also began a long history of philanthropy in Rhode Island. In 1964 she became a member of the board of Federal Hill House, a social service agency, and chair of the board for Camp Fire Girls of the Narragansett Council. Two years later, in 1966, she co-founded Big Sisters of Rhode Island, a mentoring program that pairs girls between the ages of 7 and 15 in one-on-one relationships with adult volunteer mentors. The organization is now known as Big Brothers Big Sisters of Rhode Island. (In 2000, Pieniadz established the Dr. Dorothy Pieniadz Scholarship Fund for graduating program participants seeking higher education.) In 1968, Pieniadz co-founded the Rhode Island Polonia Scholarship Foundation, which awards graduating high school seniors of Polish American descent funding for college.

In 1969 Pieniadz left the office of the dean of students to join the faculty of Rhode Island College. She taught courses in the Department of Philosophy and Foundations of Education. "When I returned to the classroom after being dean, I would tell my graduate students, I don't want to hear 'I'm just a teacher,'" she said. "The role of a teacher is a pretty powerful thing. It's not only what a teacher does inside the classroom; it's what he or she does outside of it. Outside the classroom, Pieniadz had a long history of involvement in international education. Fluent in German and Polish and a scholar of Sovietology, she started leading groups to countries in the Soviet bloc in 1959 as a member of the Experiment in International Living.

In 1973 she became involved with the Kosciuszko Foundation based in New York, which promotes Polish and American cultural and educational exchanges. Pieniadz was made director of Kosciuszko's study abroad program in Poland, which she opened up to RIC students and the Rhode Island community in 1974. From 1974 to 1982, she led groups that studied at Jagiellonian University in Cracow. Participants ranged in age from 16 to 87. She also engaged in teacher exchange programs, where teachers from other countries came to the United States for experiences and were hosted by Rhode Island College.

After a 31-year career in education at Rhode Island College, Pieniadz retired in 1987. In 2004 she established the Dorothy Mierzwa Pieniadz Endowed Scholarship Fund at RIC to celebrate her devotion to higher education and helping others improve their lives. Pieniadz continued her community involvement. Until her death, she was an active advocate for Federal Hill House and Big Brothers Big Sisters of Rhode Island. For her leadership and community service, Pieniadz received numerous accolades over the years, including the 2013 Jefferson Award by WJAR NBC 10, the 2012 Legacy of Service Award by The Federal Hill House Association, and the 2010 Legacy Award by Big Brothers Big Sisters of Rhode Island. She has been listed in "Who's Who of American Women" (1961), the "Dictionary of International Biography" (1966), "Who's Who in the East" (1967), "Leaders in Education." (1971), the "Directory of American Scholars" (vol. IV) (1974), and "Who's Who in Polish America." (1996-1997). Over the years, she often ran into former students from Rhode Island College. She would say it's wonderful to find out what they've done with their lives.  "I admit I feel even better when some of them say to me, 'You'll never know what you meant to me in my life,'" she said. "Truthfully, in the end, anybody who engages in community service knows that you get more out of it than what you put in. There's something about seeing the results that enrich your life."

Dorothy is the sister of the late Arthur, Louis, Joan Mierzwa, and Adele Gray.

In lieu of flowers, donations in Dr. Pieniadz's memory can be made to the Dr. Dorothy Pieniadz Scholarship Fund, Big Brothers Big Sisters of Rhode Island, 188 Valley Street, Suite 125, Providence, RI, or online at https://bit.ly/drdorothy. For further information and condolences, please visit MOUNTPLEASANTFH.COM. Arrangements by Supinski and Borrelli Funeral Home.

A Memorial Tree was planted for Dr. Dorothy
We are deeply sorry for your loss ~ the staff at Mount Pleasant Funeral & Cremation Service
Join in honoring their life - plant a memorial tree
Online Memory & Photo Sharing Event
Online Event
About this Event

Look inside to read what others have shared
Family and friends are coming together online to create a special keepsake. Every memory left on the online obituary will be automatically included in this book.
View Tribute Book
Services for Dr. Dorothy Pieniadz
There are no events scheduled. You can still show your support by planting a tree in memory of Dr. Dorothy Pieniadz.
Plant a tree in memory of Dr. Dorothy
Share Your Memory of
Dr. Dorothy
Upload Your Memory View All Memories
Be the first to upload a memory!
Share A Memory
Plant a Tree